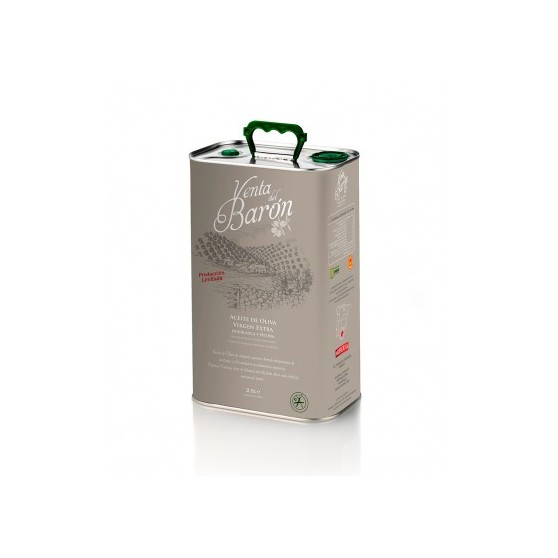 Venta del Barón Extra Virgin Olive Oil is undoubtedly the perfect flavoring for the best dishes. With more than 60 awards in different countries.

Its tasting takes us into an intense fruity green olive with herbaceous notes, mint, almond peel, banana and apple. Reminiscences of vegetables such as tomato and artichoke The entry into the mouth is sweet, slightly bitter and spicy in progression. The aftertaste is almond-shaped. Very complex, balanced and harmonious in all its olfactory-gustatory attributes. The best fragrance for breakfasts (with Rustic bread), appetizers, complex salads and any dish to give it a unique flavor

Among the 8 best in the world

Since 1998 Venta del Barón, encompassed under the Protected Designation of Origin Priego de Córdoba, has received more than 60 awards from 8 different countries, among which the one awarded by the International Olive Council as the best oil in the world and that of the Ministry of Agriculture stands out. as the best Extra Virgin olive oil in Spain. It is at # 1 of World's Best Olive Oils.

It is used by Martín Berasategui for the realization of his dishes. Also in hotels as relevant as the Waldorf Astoria and restaurants like Alain Ducasse, both located in New York City.

Venta del Barón has received throughout its history more than 150 awards both nationally and internationally (17 countries), among which stands out the one awarded by the International Olive Council as the best oil in the world and that of the Ministry of Agriculture as the best Extra Virgin olive oil in Spain. It also has the Seal of Certified Quality from the Andalusian Government Council for Agriculture and Fisheries.