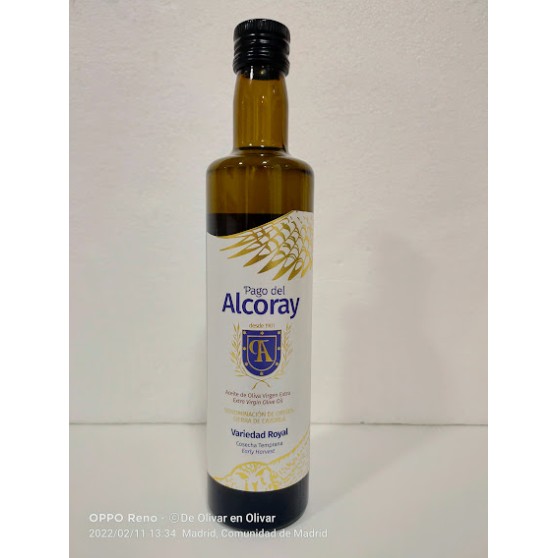 Pago de Alcoray Royal on the palate, its entrance is sweet, light in its bitterness and soft in its itching.

Alcoray was handed over as a village to Cazorla by the archbishop of Toledo, the infante don Sancho, on November 23, 1256. Later, when in 1378 the archbishop of Toledo converted La Iruela into a town, the problem arose of what terms were granted , separating them from Cazorla.
To avoid conflicts between La Iruela and Cazorla, the archbishop opted for the terms to be shared between both. On the other hand, the villages of this locality were not divided between La Iruela and Cazorla, but the villagers themselves were the ones who decided which of the two villages they were going to depend on for the payment of their taxes and other civil matters.
The history of Chilluévar, at least until the beginning of the 20th century, remained significant and framed within the history of La Iruela, until on December 14, 1926, the Chilluévar City Council was established, which made it an independent town.

The Sierra de Cazorla offers its olive grove some differential connotations that are manifested in its extra virgin olive oils, those that clothe its Denomination of Origin.
Olive groves run through this incomparable mountain range, the heart of the Cazorla, Segura and Las Villas Natural Park. And like any unique fruit wrapped in a territory, in this case our oils are watered with all the nuances of this unique Biosphere Reserve. Olive groves of Cazorla, Chilluévar, Hinojares, Huesa, La Iruela, Peal de Becerro, Pozo Alcón, Quesada and Santo Tomé.

It is made in Chilluévar with the Royal and Picual varieties.
The Royal variety was implanted by the Sierra de Cazorla offering sweet oils, although very fruity, in which fig notes predominate. This variety, which only grows in the Cazorla area, was gradually lost and replaced by the more abundant Picual.

The olive trees that were respected are over 50 years old, grow tall and dry, are located in the heart of the Cazorla, Segura and Las Villas National Park, in Jaén, offering a product with a lower yield than the Picual, but of great quality. and much appreciated.

Pago de Alcoray Royal on the palate, its entrance is sweet, light in its bitterness and soft in its itching.

The Picual variety is the most extensive in Jaén, the area of ​​the planet with the largest number of olive trees. In Pago de Alcoray they are olive trees belonging to the family and all of them are more than 50 years old, cultivated at about 800 meters above sea level, in dry land, giving a product that is highly appreciated throughout the world for its characteristics.

Pago de Alcoray Picual has a fresh mouthfeel, with a perfect balance between bitterness and itching, highlighting its green notes of tomato and green almond, an exquisite complexity.